Back to Knowledge Center
Tire Types 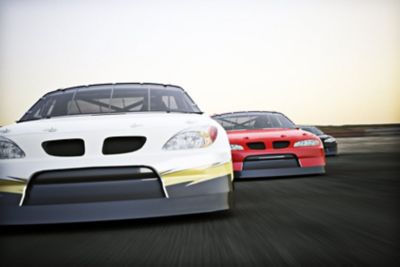 The rapid evolution of street tires over the past several decades owes much to the continuous innovation within auto racing series like NASCAR. Goodyear created the Eagle Radial Race Tire as the official provider of tires for NASCAR. Goodyear also incorporates what they learn via race technology directly into their passenger tires, such as the Eagle High Performance passenger tire.

Specs Behind a NASCAR Tire

NASCAR is the perfect proving ground for tires because Goodyear and every individual racing team monitors everything about the performance of their cars and tires so carefully. Meanwhile, track and race conditions put the ultimate strain on the various tire compounds and designs.

The wheels that teams use all measure 15 inches in diameter, with rim widths of either 9.5 or 10 inches. The Goodyear Eagle race tires are spec 28/10-15 and slick. They weigh a mere 24 pounds and have a tread thickness of only 1/8 inch.

They appear nearly bald, but this allows maximum contact with the racetrack—for optimal traction. And the tires need every bit of surface to perform. Their amount of tread surface making contact with the track at 200 miles per hour is approximately half of a sheet of 8.5 x 11-inch paper.

Regular passenger tires feature grooved tread patterns that channel water away from the tire's face. But NASCAR races are delayed for rain. Instead the variations of these tires focus on the grades of each track's banks, and the dry condition of their surfaces, which differ according to their blend of paving materials, age, and wear.

NASCAR's research and design team travels to measure in micrometers the smoothness of all 23 sanctioned tracks. The data helps Goodyear determine which tires are right for each track, from the smoothest — Martinsville Speedway — to the roughest — Atlanta Motor Speedway.

How NASCAR Tires Handle the Race

At full speed, drivers experience the same G-force as astronauts do during launches: 3 Gs. The force really tests the tires on the right side of the cars as they bank repeatedly through left turns. During cornering, the right front tire supports a load of some 4,000 pounds. That's about four times greater than what's demanded by the left side.

To account for the extreme force pressing down through these ultra-high performance tires, Goodyear uses reinforced sidewalls. It's the same technology used in tires engineered for light trucks and trailers that must likewise bear heavy loads. And just in case of a blowout, Eagle race tires come equipped with an inner safety tire, like the auxiliary support of a run-flat tire. This technology, >pioneered in 1966 and first tested by drivers like Richard Petty, allows drivers to limp their cars into pit row for service.

How Much Does a NASCAR Tire Cost?

A single Eagle race tire costs about $400, and each racing team is allowed the same number of them, anywhere from five sets to 14, depending on the length of the race. On the high end, that's $22,000 for tires just for one race. Makes it seem pretty fair to spend $800 for a set that's going to last 50,000 miles.

Eagle race tires last on average 150 miles. Which proves more than anything how grueling race conditions are. But with every lap, lessons are learned that helps keep drivers safe on our everyday roads.